Codicil to Will (Changes to the Will)

How To Make A Codicil?

Have you made a Will with respect to your properties, savings, assets and all that you leave behind when you die? Is there something you want to change in the Will that you made? 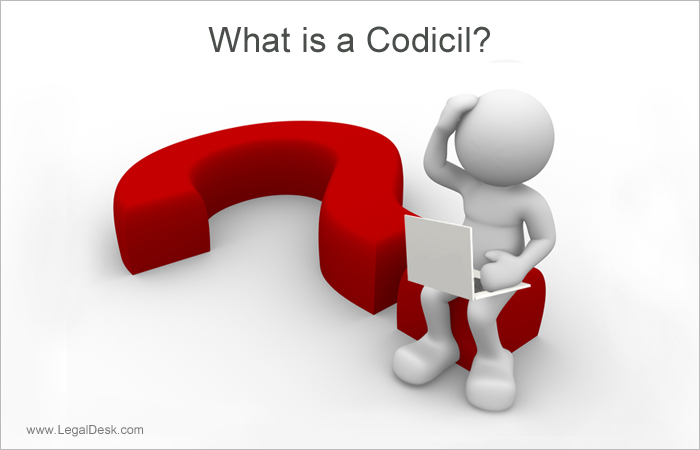 A change can be in the form of addition, deletion or substitution of some clause or name or property or date etc, with a new one, or any other type of change that you wish to do in your Will. For this you cannot make these changes directly in the Will document, and if any alterations are seen in the Will document, it becomes void.

So how to make alterations to your Will?

Simple! You have to draft all the alterations, clearly mentioning each clause and the change done, in a separate document. This document is termed as Codicil in law. A Codicil can be made only to an existing Will, not to any future Wills. The Codicil is to be read as part of the Will and is considered as an extension of the Will.

The person who has made the Will, i.e. the Testator, shall be the person who also makes the Codicil and signs it in the presence of two witnesses. The date on the Codicil should be very clear.

What Should Be Included In A Codicil?

Now before you proceed to make your Codicil you have to understand what are the important details that are to be included in the document. You should mention the following details:

Requirements To Make It Legally Valid

A Codicil becomes legally valid once it is drafted and signed by the Testator.

But always check for these details in the codicil:

1. My mother made a Will in my name for the entire property she owns. But now she wants to include the name of my brother also to the will. Can she edit the previous Will? Or should she make a totally new will?

Since your mother wants to only include your brother’s name she can make a Codicil mentioning her desire and keeping it along with the Will. A Codicil can be created by drafting the details she wants to include and the amendments she wants to do in the original Will, in a separate paper and sign it in presence of two witnesses who also sign the document.

2. Can we alter the will by directly adding any sentence or word in the will document and putting our signature in those places?

No, you are not supposed to do even a single change in the original Will document directly. Any change of ink, or handwriting or any insertion or deletion of letters or words in the Will document may lead to suspicion and can create a chance for a long legal battle. The only way you can make changes to your Will is by creating a separate document called Codicil.

3. Do I need to register the Codicil I made to my earlier Will?

A Codicil need not be registered. It has to be signed by the Testator and attested by two Witnesses.

So are you looking out to make those specific alterations to your Will that you made sometime ago? Are you worried of paying a huge lawyer fees? Or have no time to draft it yourself? Then don’t worry. Legaldesk.com is the only helping friend that can solve your frustration with a well structured and legally correct customizable Codicils or Will amending documents. Just contact us if you can’t do it yourself. Visit our website and create your own document at a fairly less price.