Revocation Of Power Of Attorney

How to revoke or cancel your Power of Attorney?

Have you given a Power of attorney to someone you know? And later due to some reason you don’t want to continue the granting of power to the Attorney, or in situations where the Attorney is not ready to continue with the power granted by you, what should you do? 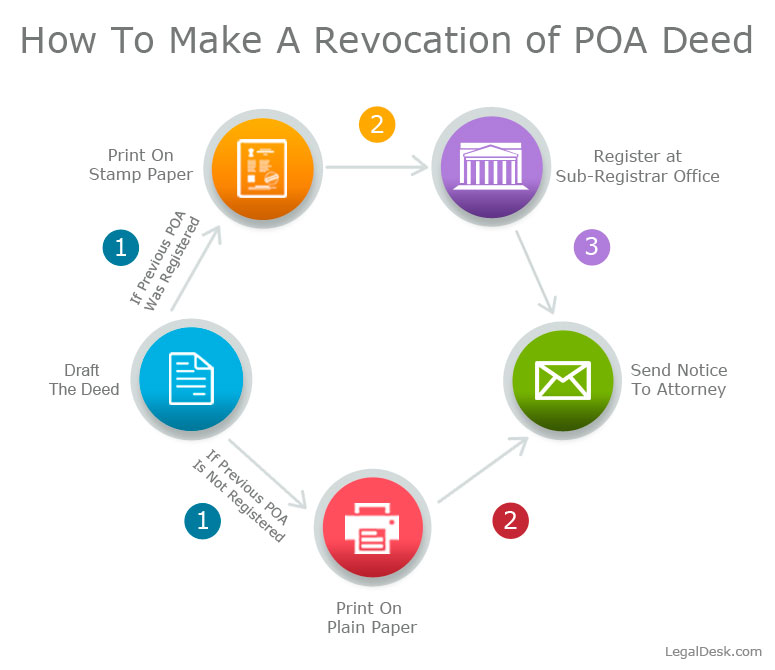 To revoke or cancel the Power of Attorney granted by the Principal and if registered, the same Principal (the person who granted the power) has to draft yet another Revocation Deed expressing his intention to cancel the earlier deed with effect from a particular date.

You also have to send a written notice to the person to whom the power was granted, that is the Attorney, mentioning the cancellation of the deed from the date of notice. Otherwise if the Attorney comes to know of your intention before the notice is given to him, he may opt to do some mischief in case he has any crooked ideas.

If the Power of Attorney is not registered like the case of Special power of Attorney, where it is just made on a plain paper, and notarised, then a written notice to the Attorney mentioning the cancellation is enough.

What should be included in the deed?

The Revocation Deed should include the following:

You can also elaborate on the nature of power that was given and the reason to revoke etc. though these are not mandatory.

Requirements to make it legally valid

The registration of Power of Attorney is compulsory in some states and may not be so in other states. This is always under constant amendments according to the particular Government policies and keeps changing from state to state.Hence the general ways to make the Revocation of Power of Attorney legally valid also may be slightly varying according to the state where it is made.

If the Power of Attorney deed was not registered earlier, then the Revocation Deed also need not be registered. It can be drafted in a plain paper and notarised and the copy can be sent to the Attorney.

If the earlier deed of Power of Attorney was registered, then it is compulsory to register even the deed of Revocation in the same Sub-Registrar office, in order to avoid any future disputes.

If the earlier deed was not registered, then there is no need to register the revocation Deed as well.

Once the Attorney is given the notice of cancellation of the deed which granted him powers to do certain acts on behalf f the Principal, he is no more entitled to use those powers. Inspite of that if he does any act on behalf of the Principal, then the Principal can take legal action on him. Also the Principal will not be bound by his such acts done after receiving notice of revocation.

Since you have not registered your Power of Attorney, you can send a written notice on a plain paper or email to your cousin stating the cancellation of the power given to him with effect from the date of notice. And please do it fast, since if he has any wrong motives to commit some fraud, you may also become bound by it. Let him not know your intention until he receives the notice. Please don’t let it out before that.

LegalDesk offers you an already drafted Revocation Deed and helps you to easily get a document within minutes. No hassles of finding a lawyer, or paying huge fees or finding appropriate words to include in the document. Everything is taken care of by us. You just need go to our website and fill the form, or just contact us if you need more help.