This day marks a milestone for the UIDAI (Unique Identification Authority of India) and private entities that undertake Aadhaar-based eKYC services as the Supreme Court declared the verdict on the petitions challenging the constitutional validity of the Aadhaar Act. A bench consisting of Chief Justice of India Dipak Misra, Justices Sikri, Chandrachud, Bushan, and Khanwilkar declared the Aadhaar verdict ending the 38-day long hearing. 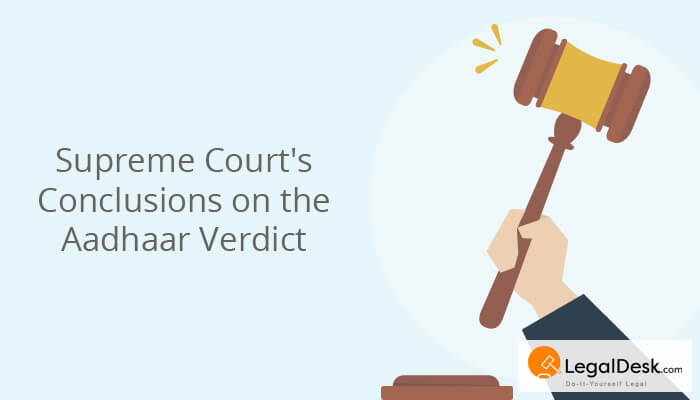 Based on the pleadings on record and the submissions raised, the Supreme Court (SC) considered that the following were the main issues that were to be considered.

(1) Whether requirement under Aadhaar Act to give one’s demographic and biometric information is violative of fundamental right of privacy ?

(2) Whether the provisions of Aadhaar Act requiring demographic and biometric information from a resident for Aadhaar number are unconstitutional and do not pass three fold test as laid down in 82 Puttaswamy case ?

(3) Whether collection of data of residents, its storage, retention and use violates fundamental right of privacy ?

(4) Whether Aadhaar Act creates an architecture for pervasive surveillance amounting to violation of fundamental right of privacy ?

(5) Whether the Aadhaar Act provides protection and safety of the data collected and received from individual ?

(6) Whether Section 7 of Aadhaar Act is unconstitutional since it requires that for purposes of establishment of identity of an individual for receipt of a subsidy, benefit or service such individual should undergo authentication or furnish proof of possession of Aadhaar number or satisfy that such person has made an application for enrolment ? Further the provision deserves to be struck down on account 83 of large number of denial of rightful claims of various marginalised section of society and down trodden?

(7) Can the State while   enlivening right to food, right to shelter etc. envisaged under Article 21 encroach upon the rights of privacy of the beneficiaries ?

(8) Whether Section 29 of the Aadhaar Act is liable to be struck down inasmuch as it permits sharing of identity information ?

(9) Whether Section 33 is unconstitutional inasmuch as it provides for the use of Aadhaar data base for Police investigation, which violates the protection against self­incrimination as enshrined under Article 20(3) of the Constitution of India ?

(10) Whether Section 47 of Aadhaar Act is unconstitutional inasmuch as it does not allow an individual who finds that there is a 84 violation of Aadhaar Act to initiate a criminal process ?

(11) Whether Section 57 of Aadhaar Act which allows an unrestricted extension of Aadhaar information of an individual for any purpose whether by the State or any body, corporate or person pursuant to any law or contact is unconstitutional ?

(13) Whether Aadhaar Act is unconstitutional since it collects the identity information of children between 5 to 18 years without parental consent ?

(14) Whether Rule 9 as amended by PMLA (Second Amendment) Rules, 2017 is unconstitutional being violative of Article 14, 85 of Constitution of India and Section 3,7, 51 of Aadhaar Act. Further, whether Rule 9 is ultra vires to the PMLA Act, 2002. itself.

(15) Whether circular dated 23.02.2017 issued by the Department of Telecommunications, Government of India is ultra vires.

(16) Whether Aadhaar Act could not have been passed as Money Bill ? Further, whether the decision of Speaker of Lok Sabha certifying the Aadhaar (Targeted Delivery of Financial and other Subsidies, Benefits and Services) Bill, 2016 as Money Bill is subject to judicial review ?

17)   Whether Section 139­AA of the Income Tax Act, 1961 is unconstitutional in view of the Privacy judgment in Puttaswamy case?

(18)   Whether Aadhaar Act violates the Interim Orders passed by this Court in Writ Petition (C) No. 494 of 2012 & other connected cases?

The Aadhaar judgement concludes that:

We are of the view that most of the apprehensions of the petitioners stand assuaged with the treatment which is given by us to some of the provisions. Some of these are already discussed above and some provisions are debated in the next issue. Summary thereof, however, can be given hereunder:

(b) Metabase relating to transaction, as provided in Regulation 26 of the aforesaid Regulations in the present form, is held to be impermissible, which needs suitable amendment.

(c) Section 33 of the Aadhaar Act is read down by clarifying that an individual, whose information is sought to be released, shall be afforded an opportunity of hearing.

(d) Insofar as Section 33(2) of the Act in the present form is concerned, the same is struck down.

(e) That portion of Section 57 of the Aadhaar Act which enables body corporate and individual to seek authentication is held to be unconstitutional. Writ Petition (Civil) No. 494 of 2012 & connected matters Page 293 of 567

(f) We have also impressed upon the respondents, as the discussion hereinafter would reveal, to bring out a robust data protection regime in the form of an enactment on the basis of Justice B.N. Srikrishna (Retd.) Committee Report with necessary modifications thereto as may be deemed appropriate.

What Is eKYC? eKYC is a service that enables an Aadhaar holder or citizen to share their...

What Is eKYC? eKYC or Electronic Know Your Customer is the electronic process of filing documents that relate...

What Is KYC? KYC is Know Your Customer and is basically customer identification and verification through official...

There are 0 comments on "Supreme Court’s Conclusions on the Aadhaar Verdict".