A co-founder may be a friend or relative in the initial stages of your business. But as time passes, your startup could require some transparency and boundaries to be set between their personal and professional life. Even though your startup can function without any formal drafted agreement, there is a potential risk that may arise in the long run, that could lead to differences between founders in running the business or any other account.

When such misunderstandings arise between founders, you may regret having an agreement. In such cases a co-founders agreement will come in handy. Such a strong agreement must clearly mention the terms and conditions describing the roles and responsibilities of the founder as well as the co-founder. 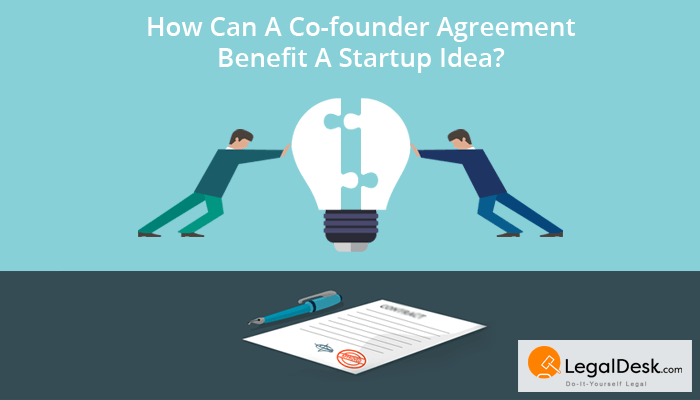 In short, a co-founders agreement is a contract between the founder and co-founders of a business entity that puts forth the ownership pattern , investments, roles and responsibilities of a company.

This agreement will safeguard a co-founder in cases of disputes or misunderstandings, as it provides protection to the co-founder that shows what they agreed upon. Similarly, a business can operate on the basis on the basis of any formal agreement, but to prevent long term risks, it is suggested to follow certain legal procedures to process fair business between founders and co-founders.

Why Do Startups Need A Co-Founder Agreement?

Startups have the tendency to slow down the growth of established industries, but lack internal organisation. A co-founder agreement will safeguard and protect the interests of both the founder and co-founder in case of any misunderstanding and dispute and thereby develop a diplomatic understanding among partners of the same business.

This agreement will make it legally binding and ensure an organised manner of work. In cases a startup decides to function through a partnership, one must draft a partnership deed to prevent misconceptions and misunderstandings.

Points That A Co-Founder Agreement Must Include

These details must be embedded in a co-founder agreement:

However, an insight into certain other parts that need to go into a co-founders agreement has been mentioned below:

The basic question of who owns how much of the equity in a startup will remain a primary question. Questions like who owns most of the business, and who contributes the most to the development of the venture will remain existent in the minds of the employees until there is some sort of legal binding document between the founder and co-founder. In the initial stages of your startup, consider posing the question as to why do you need to have a split up of  the ownership of shares in your company.

Ownership in a startup can be determined on the basis of:

The roles of each co-founder in a startup must be mentioned and clearly defined. This will help in bringing in an organised structure in the nature of work carried out by each individual. Every co-founder must be assigned a particular job in order to move about each task in a predetermined manner. This will avoid overlapping of job roles and responsibilities within your startup.

This clause imposes obligations on co-founders to keep company sensitive business information confidential. This ensures there is some level secrecy in a co-founder handling confidential information.

This clause ensures that in case a co-founder leaves, he/she cannot seek out clients or  employees from the organisation to their business entities, if they have any. This is the most common act that most employees do once they leave a startup/ organisation. In order to prevent such happenings, a co-founder agreement must specify details about convincing clients to join their newly hoisted organisation.

Dismissal of a founder is considered to be a sensitive issue. Points like how and what basis a founder will be fired is crucial and must be mentioned in the co-founder agreement. Co-founders must lay down rules and circumstances under which all must agree with the agreement.  These circumstances can be on the basis of fraud on the company and other co-founders, absence from work, illness etc. Co-founders must also state values or other factors that they must adhere to while making any decision with the company. 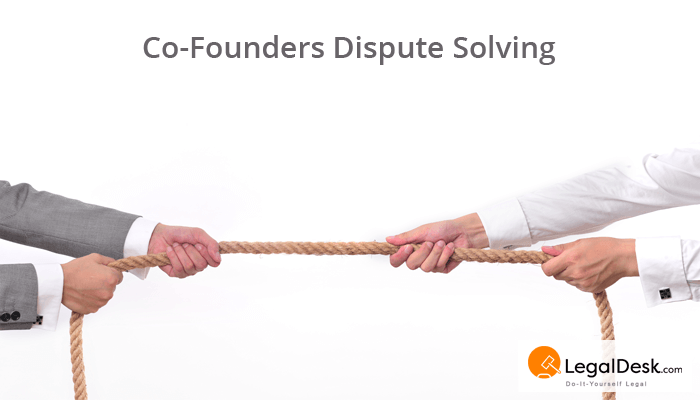 A co-founder dispute is governed under the civil court wherein, the proof will be measured on the basis of preponderance of probabilities. This means the greater the evidence that persuades the judge, the more fair will be the judgement. Most startups do not approach the national courts in case of any internal or external dispute.

Instead they approach the issue with another possibility called arbitration. Arbitration is an alternative way of settling disputes in a startup or organisation. This is an consensual and effective method of resolving commercial disputes outside the ambit of the national judicial system.

An arbitration agreement can be mentioned in the contract or treated as a separate agreement in certain disputes which may arise in future. An alternative dispute mechanism can withdraw you from the complication of various disputes than take the issue to a national readressal agency.

When a founder and co-founder begin formulating ideas to develop a business plan, it is understood that they will have a business design set to represent their business. In such a scenario an Intellectual property assignment agreement needs to be done.

An intellectual property comes in many forms, but whatsoever Intellectual property is developed for your startup it must belong to the entity and not individuals behind the development. This concept must be applicable to all co-founders, employees, employers, contractors and consultants.

A business having co-founders in it may develop your business in the long run. On the contrary, one may start the business with all right intentions and never seperate. But separation may take place due to certain cases. You need to plan ahead in order to avoid disputes among founders and co-founders.

Get All Startup Legal Documents Here

If you’ve got that entrepreneur in you, don’t hesitate to get started! Secure yourself with all types of legal documents needed when you build your startup. We at LegalDesk.com will help you accomplish your dream by providing assistance and various documents that you need to carry forward your entrepreneurial ideas. Click the button below and avail our startup package. Try our service now and stay digitized!

Starting a business requires a lot of research and time that certainly does not happen overnight. As...

What Is A Termination Letter? A termination letter summarizes the details of firing an employee that the...

There are 0 comments on "Co-Founder Agreement: Benefit To The Startup Space".