Apart from change, death is the only constant. Someone has rightly said, death is as inexorable as taxes. Can you bear the thought of seeing your children suffer after your death just because you didn’t write a Will? Or would you be happy seeing your kids fight over a property after your death? History is testament to the family feud that ensued between the Ambani brothers only because their father didn’t deem it necessary to leave them a ‘will’, besides all his property.

Would you like to see your properties and other possessions being distributed as per the provisions of succession laws applicable to you and not to the person you actually want your properties to pass to? If the answer to all these questions is a clear no, then it is important you have a will so that you are reassured that your hard earned wealth falls into proper hands when you die.

Here, it is pertinent to mention that a person dying without a will is known to have died intestate as per the Indian Succession Act, 1925 (hereinafter referred to as the Act) and his property gets distributed as per the provisions of the succession law applicable to him. 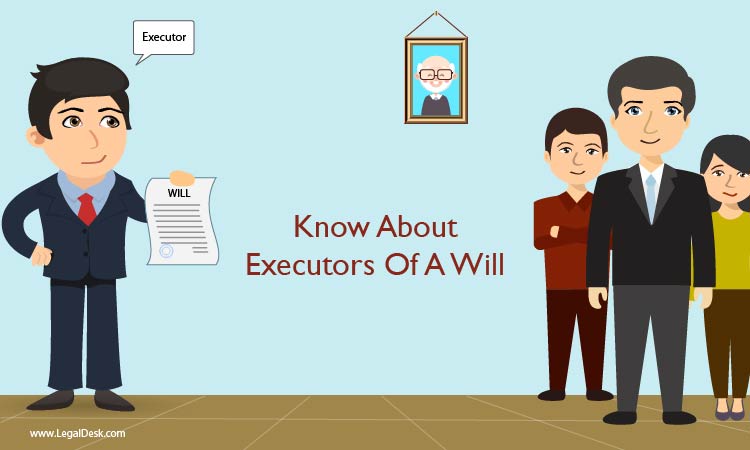 Executor Of A Will Defined

Once your will is in place, you would want someone to administer your assets after your death. The person doing so is called an “Executor”. An executor of a will is someone who implements the will after the death of the testator. He is named in the will by the testator and is essentially a legal representative of the deceased person (testator) and he can either be named or implied in the Will.

According to Section 2(c) of the Act, an executor is a person to whom the last will of a deceased person is confided by the testator for the execution of such last will.

He is appointed to carry on the smooth functioning of the duties bestowed on him by the deceased. These duties can range from distributing properties, paying debts, collecting valuables to safeguarding the testator’s interests. Appointing of an executor though not necessary, is generally advisable. A testator can choose his own executor and it can be someone they trust or it can even be one of the beneficiaries of the will. An executor is the one who is assigned the task of distributing and overseeing such distribution of the testator’s wealth to his beneficiaries after his death.

Duties Of An Executor

An executor has numerous duties few of them being:

Powers Of An Executor

Section 2(a) of the Act defines administrator as a person appointed by a competent authority to manage the estate of a deceased person where there is no will or where there is a will but no executor. He is a legal representative who administers the estate of the deceased and oversees the settlement of his assets if he dies intestate (without a will) or where the executor of a will is incapable of performing or has refused to perform as an executor.

Probate And Its Importance

Section 2(f) of the Act defines “probate” as the copy of a will which has been certified under the seal of a Court with a grant of administration to deceased testator’s estate.

According to Section 227 of the Act, when probate of a Will is granted, it authenticates the validity of the will from the death of the testator and it also validates all intermediate acts of the Executor.

As per Section 213 of the Act no right as executor or legatee can be established in any Court of law unless and until a Court of competent jurisdiction in India has granted probate of the will under which the right is claimed. This section applies only in the case of wills made by Hindus (includes, Buddhists, Sikhs or Jains).

Section 222 of the Act provides that a probate shall only be granted to an executor appointed by the will. Such appointment may be express or implied. A probate to a minor or a person of unsound mind or to any association of individuals unless and until it is a company and it satisfies the rules published in official gazette by the State Government.

How Does LegalDesk Come Into Play?

At LegalDesk.com, we emphasise the importance of creating a will and also understand the repercussions that ensue because of not writing one. Well, no need to lose sleep thinking about how to draft a will. Till the time we are here you have nothing to worry, you can now create a will on our website in a matter of minutes and if you want we can even help you get it registered. We recommend registering your will even though it isn’t mandatory. LegalDesk.com is your one-stop solution for all your legal documents, you can choose from a variety of legal document templates on our site and have us print them on Stamp paper and deliver to your location.

Generally, Probate is the process of dealing with someone’s possessions, money and final wishes after they die....

The executor in will is a legal representative of the deceased person and acts in accordance to...

Background Of Wills And Testaments Testaments and wills in India are governed by Section 5 of the...

There are 3 comments on "All You Need To Know About Executors Of A Will".