For most of us, marriage is a monumental step. We are wise to call it a life-changing move as even many small things tend to change after marriage. This change is more for the ladies than it is for the gents. All over the world, a general trend for a woman is to take on her husband’s name after marriage. Although in the recent years, this has receded with many women opting to keep their maiden names, it is still widely prevalent in our country.

For those of you who wish to change your name after marriage, we’re here to guide you on how to get that done in our country. You can use our pre-drafted affidavits for name change after marriage to ease things up a bit. But before that, let’s quickly discuss how the change usually is in different communities. 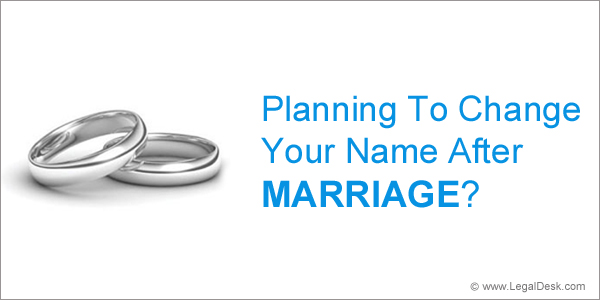 Hindu Marriages – In most parts of the country, a Hindu wife takes on her husband’s surname after marriage. However, in some of the southern states, women replace their surname with their husband’s first name. Some communities mandate such a name change after marriage, especially, the more orthodox ones. There are some communities which demand that a girl’s first name also be changed. However, there is no law which dictates that a woman should change her name.

Christian Marriages – It is common for Christian ladies to change their surnames to their husband’s surnames after marriage. Again, no law states that a woman should change her name. And these days it is becoming increasingly uncommon for women to change their names.

Muslim Marriages – Islam does not command a woman to change her name after marriage. But due to influence from the West, it has become increasingly common. Especially in the southern states of India, a majority of Muslim women take on their husband’s surname. However, Muslims rarely change the first names of their brides. It is almost non-prevalent.

Other Marriages – Like in the case of Hinduism, Christianity and Islam, there is no law prevalent in our country that mandates women belonging to other religions to change their names after marriage. So even in other religions like Buddhism, Sikhism, Jainism and Judaism, women can choose not to change their names officially. Although unofficially and for ceremonial purposes, they may be given new names, it is not mandated by law.

Getting Your Name Changed

Although the procedure as such involves simple steps, the process as a whole may take time. Also, the Indian Law does not allow a person to change their names more than once in their lifetime. So this is a matter that requires due consideration.

Here’s how you get your name changed in India. Follow these simple steps and you’ll be done in no time!

The first step involves in creating an affidavit stating your details and your wish to change your name now that you are married. The affidavit will also require details like your maiden name, proposed new name, husband’s name, your address and sometimes a copy of your marriage certificate. Place your signature on the affidavit and attach a photo of yours too. Once your affidavit is ready, print it on Stamp paper of recommended value. It is usually INR 10/-.

Step 2: Getting the affidavit notarized

Getting an appointment with the Magistrate could be troublesome. However, a Notary will do just as fine. In case you are applying from abroad, get the affidavit attested by the embassy. Once your affidavit is notarized, the most effort requiring task is done!

Once you have your affidavit notarized, you will have to publish an ad about the same in two local newspapers/dailies. Keep in mind, one ad should be in a local language daily and the other in an English daily. This should be easy as most newspapers have a section dedicated to such ads.

This is a mandatory step for Govt. employees and not so compulsory for the others. However, to be on the safer side, it’s best to execute this step. Approach the Controller of Publication of any Govt. press and they should guide you about the internal procedures. The affidavit prepared in Step 1 along with other valid ID, clippings of the newspaper ads and documents may have to be presented at this point.

Pay the required fee and then you’ll be informed about a possible date on which the publication will appear. Keep copies of this for future reference.

If you’ve changed your name successfully, the next step would be to notify your bank, hospitals and other important institutions about this change. If you held a passport previously, you may want to replace Father’s name with Husband’s name. Thankfully, we have ready-to-use affidavit for changing your name in your passport.

This could be the most difficult step in the whole process. To draft a solid affidavit and help you ace through the process of finding a stamp vendor and all that, you may require a lawyer. There is though a better alternative! LegalDesk offers ready to use lawyer verified name change affidavits that can be prepared in a matter of minutes from the comforts of your home. You don’t have to even find a stamp vendor because we can print it on Stamp paper of due value and mail it to an address of your choice! We also have a host of other ready to use affidavits and legal documents. All of this available at very compelling prices! So go ahead, try it right now. We hope you enjoy your new name.

Find out why the handsome hunks and beauty queens of Bollywood made changes to their names. Was...

There are 2 comments on "How To Change Your Name After Marriage?".