A power of attorney is an instrument allows someone else instead of yourself does some general act or a particular act. You would want to make a power of attorney when you want someone else to act on behalf of you, but at the same time, safeguarding your interests. The acts so done by an attorney would be as if you are doing the acts by yourself but through him.

In simple words, a power of attorney is just a delegation of power by one person to another who in turn, acts as his agent. There is a principal-agent relationship between them. Ultimately the principal is still in control of his/her affairs as (s)he is merely delegating higher powers to the attorney under a legal instrument. 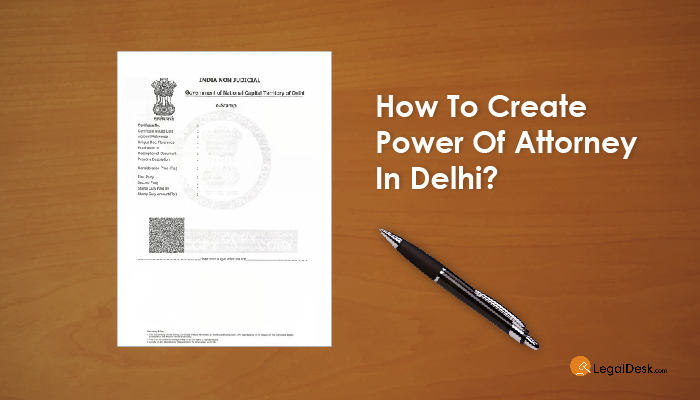 Power Of Attorney In Delhi

Thus, a power of attorney is a simple yet powerful document helping you to simplify things by delegating your powers to another and allowing them to make wise and well thought decisions on your behalf as if you were present while making those decisions.

Who Can Make A Power of Attorney?

Anyone after attaining the age of maturity and with a sound mind would be qualified to make a POA. And only a major can be appointed as an attorney.

When To Use POA?

Power Of Attorney By Companies

Many companies resort to power of attorney deeds to delegate their powers that are needed in the day to day administration. A company being an artificial person, all acts done by the company are done through the attorney or agent. In the case of companies, unless the power of attorney document expressly implies it, sub-delegation of the powers conferred to the attorney shall not be allowed.

A power of attorney is valid till such time it is revoked by the principal or by the death of either of the parties.

A word of caution would be to appoint a trustworthy person as your attorney. The attorney should know the scope of his powers to prevent any future disputes.

How To Make It Legally Valid?

Revocation of Registered Power Of Attorney

However, if the document does not mention the conditions for revocation and is not an irrevocable one, it can still be revoked by executing a document revoking it and also placing an advertisement in the newspaper stating that the power of attorney document has been cancelled. A copy of the document shall also be served on the attorney to make him aware of his cancelled status.

A registered power of attorney can also be revoked by a registered deed of cancellation. A notice should be sent to the attorney to let him know of the cancellation. An additional precaution could be made publishing the same in the newspaper to let others know as well.

No. You would still retain all the original rights that you had.You are just delegating your powers in favour of some person who will act on your behalf.

A Letter of Authority is generally used for smaller and specific tasks and does not have a legal validity. For e.g. to collect a cheque book from a bank.

For more bigger and proper transactions, a power of attorney is more suitable and has the legal advantage of being notarised. For e.g. to operate a bank locker.

A major difference between a Letter of Authority and a Power of Attorney deed is that, in the former’s case, one person authorises another person to work “under his control” and supervision whereas, in the latter, there is greater independence as the attorney acts “on behalf” of the attorney. However, both the documents have limitations as the holders cannot work beyond the scope of the documents.

To create POA in Delhi, all you have to do is click the button below and fill in the details in the form that you will be directed to. Once you do the form filling, your POA document is ready to download. To get it printed and delivered on Stamp paper, you will have to place an order for home delivery. In case, you prefer to use your own format of Power of Attorney, you can still use our Print ‘n’ Deliver service to get the document printed on Stamp paper and delivered.

There are 2 comments on "How To Create Power Of Attorney In Delhi?".