A common doubt for women these days is what to prefix their name with once they are married. Ms. or Mrs.? Historically, married woman used the prefix Mrs., but in the recent times, women prefer using the prefix Ms. which is commonly used by both single and married women, just like you would use Mr. for men. 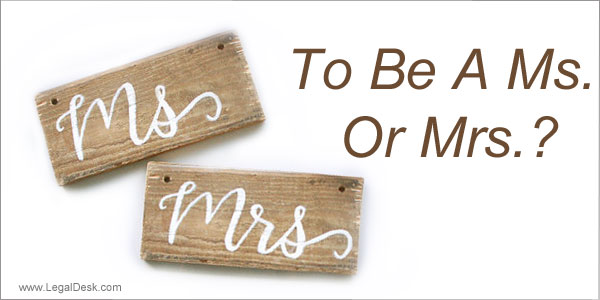 Ms. is the new age prefix used for both married and single women alike. It would be used by those women who want keep their identity unchanged after marriage. In some places, both Miss and Mrs are still being used in some parts of India, but it is changing.

While ‘Miss’ is used for an unmarried woman and ‘Mrs.’ for a woman who has taken her husband’s name after marriage, the recent entrant, ‘Ms.’ can be used in both the cases.

The last few decades saw a lot of social norms being broken, women have become more opinionated and independent and the demand for equality rose. Which brings us back to the topic of discussion – In modern day, what should a married woman’s prefix be?

The prefix Ms. came into the social scenario when people started wondering why the females alone had to change their surnames, first names too in some cases and their prefixes while the men changed nothing. As it was a fair question, the society warmly welcomed Ms.

Why is Ms. a better option now?

While we fiercely agree that personal titles are a matter of one’s own choice, the social norm has shifted to the Ms. usage in the recent years. As women prefer to keep their marital status conspicuous or as it causes lesser confusion, Ms. has almost completely replaced Mrs.

Why do we discourage the use of Mrs.?

We’d like to think that we are a new age company that likes to keep up with everything. So, when some of our female customers asked us why we didn’t have the Mrs. option on any of our forms, we thought that we should give an explanation. Here’s why we don’t have the option-

So, keeping up with the times, our team felt that sticking to the default title for women in today’s times would make more sense than to give various options like Miss, Ms. or Mrs. There you go, that’s why the forms available on our portal employ the Ms. usage. Women are bright, strong and independent, we applaud the fairer sex for that. If you are looking to add your spouse’s surname or to change/ correct your name, then we’re glad to help you out. Just click the button below and opt our package. Cheers!

A marriage affidavit is used to prove the union between a married couple. It is a proof...

A religious marriage ceremony in India is considered to be a legal marriage. However, getting a legal...