Just like the place and society we were born into, we were never offered the chance to choose something so crucial as an identity which sticks for an entire lifetime. Parents choosing your name may still be the way of the world, but that shouldn’t stop you from choosing an identity based on your religious affiliations which could change over time. Now times are a-changin’, and so don’t let the illusion of difficulty in name change make you reconsider.

If you want to have a name change, and that you are worried over the demanding time and patience it entails, there is little cause for you to continue to do so, for it is our pleasure to serve customers in matters such as these, as LegalDesk specialises in furnishing a varied number of legal documents. 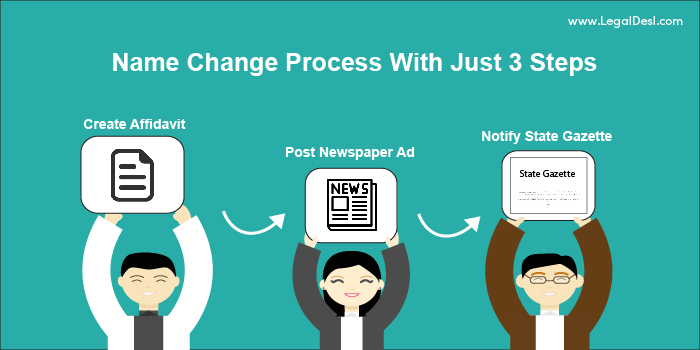 Name Change process may seem tedious and elaborate without the right form of guidance. And so, to assist you at every step of the way, we have come up with the Name Change Package which should help you through all the formalities involved. While name change for people working with Central Government is done by the Central Gazette in Delhi, other citizens can have their name changed from their respective State Gazette. LegalDesk offers assistance in Name Change package for both Central Gazette and state Gazettes (in this case Karnataka) too.

At present, there are no rules set by the Karnataka Government regarding the procedure for Change of Name. However, it may only be a matter of time before the changes recommended by the Law Commission Of India to Section 15A of Karnataka Birth and Death Registration Act, 1999 are implemented. Currently, due to the lack of a proper procedure, the following ad-hoc procedure is followed :

An affidavit for Name Change is merely for the purpose of stating the deponent’s wish to change his/her name. It is printed on Stamp Paper and after the payment of respective Stamp Duty, the Affidavit must be attested by First Class Judicial Magistrate/Notary Public.

Once the attestation of the Affidavit is over, one has to post a Name Change ad in a Regional newspaper. National Newspaper is no more required.

Notifying the Karnataka State Gazette isn’t mandatory, but it will be necessary when one has to change the name on his/her Government issued ID cards.

An affidavit attracts a certain amount of Stamp Duty. Though printing the Affidavit on Stamp Paper is not mandatory, paying the Stamp Duty definitely is. An Affidavit, according to The Karnataka Stamp Act, 1957 is subject to the payment of Rs. 20 as Stamp Duty.

Depending on the reason for one to change his/her name, there are many kinds of Affidavits, some of which are mentioned below-

Affidavit For Change Of Name

Affidavit for Change of Name after marriage

Affidavit for Change of Name of minor

Affidavit for one and the person

Affidavit for Change of Signature

Affidavit for Change Of Name after Divorce

Once your Affidavit is Notarized, it is equally crucial for you to publish an ad in a regional newspaper disclosing the same to the public. It is a mandatory step in the process of Change of Name. Also, remember to cut out at least ten original copies from the newspaper for one may be required to present it when updating the Change of Name in other documents.

An example of the newspaper ad that we publish can be seen as follows,

Notifying In Karnataka Gazette Regarding Your Name Change

Procure an application, normally called, ‘Deed Changing Surname Form’ from the Karnataka State Gazette Office, Government Central Press, Mysore Road, Bengaluru- 500059. Though this step is not mandatory in the process of Name Changing it is mostly recommended as one has to present the original copy of Gazette publication when one has to change the name on the identity proofs.

This can be quite a grueling task as there is very little information/rules in the State of Karnataka for the Name Change process. To make things short, your one sure shot way to successfully publishing your name in the Gazette would be through LegalDesk. Wait no more and start by drafting your name change affidavit to get started right away.

Find out why the handsome hunks and beauty queens of Bollywood made changes to their names. Was...

There are 15 comments on "Change Of Name In Karnataka".