It is likely that every person recollects at least one instance of being asked to submit an affidavit. The reasons may be diverse, but the result is the same- Producing an affidavit gives increased credibility to claims made by a person. 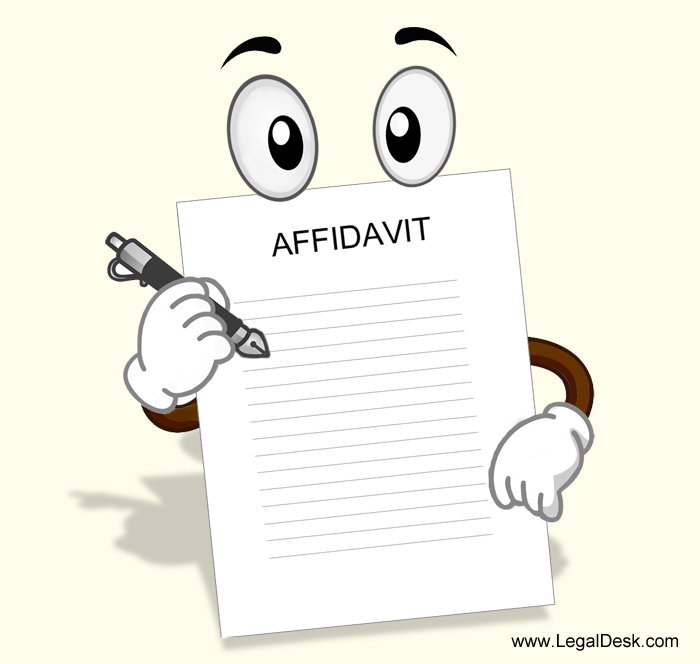 There is clearly a difference between a mere letter claiming that a person has lost his original certificates and an Affidavit, where a person swears before a magistrate or a judicial officer in written format, that he has lost his original certificates and is willing to surrender the original in case he retrieves it. The latter option holds the person liable to face any legal consequences in the event of his swearing of untruths or making or misrepresentations.

The term Affidavit refers to a sworn statement in written format made especially under an oath or affirmation before an authorised officer or Magistrate.

In other words, an Affidavit is a declaration of facts made in writing and sworn before a person having the authority to administer oath. All affidavits are verified statements and printed on Stamp papers of different denominations.

All affidavits need to be drawn up in the first person and should contain facts and not inferences. A person who makes an affidavit is called a Deponent or an Affiant. The person who has authority to attest a certificate may be a Magistrate who may in turn be either a Judicial or an Executive Magistrate, a Notary Public or a Commissioner of Oaths  depending upon the affidavit which needs to be attested. Indians living abroad can swear affidavits before Consular officers posted in Indian missions.

Who Can Create An Affidavit?

In order to create an affidavit, an individual should have attained majority and should be in a position to understand the nature of the contents sworn. In other words, the person should not be insane or incapacitated to the extent of not knowing the meaning of the statements mentioned in the affidavit.

Essential Features Of An Affidavit

Contents Of An Affidavit

An affidavit should include only those facts that a deponent is able to prove to his personal knowledge. It should not contain assumptions and vague beliefs. The only exception to this rule is Interlocutory Applications submitted in civil proceedings which may be based on the belief of the deponent. However, it is subject to to the rule that the source of the information shall be specified and that the deponent shall be subject to cross verification by the other party.  An affidavit contains plain facts listed one after the other and a verification clause which is to be attested by the prescribed officer with authority. 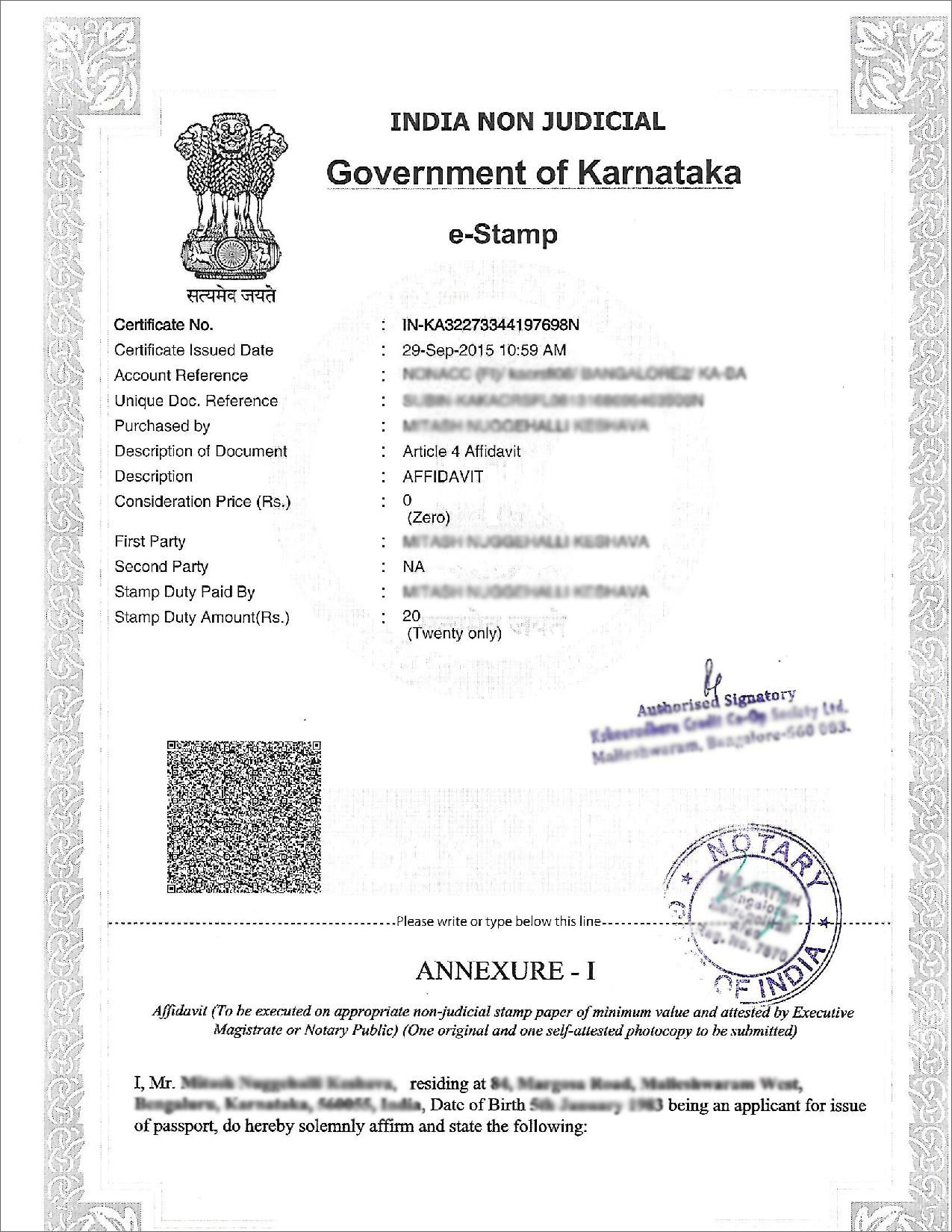 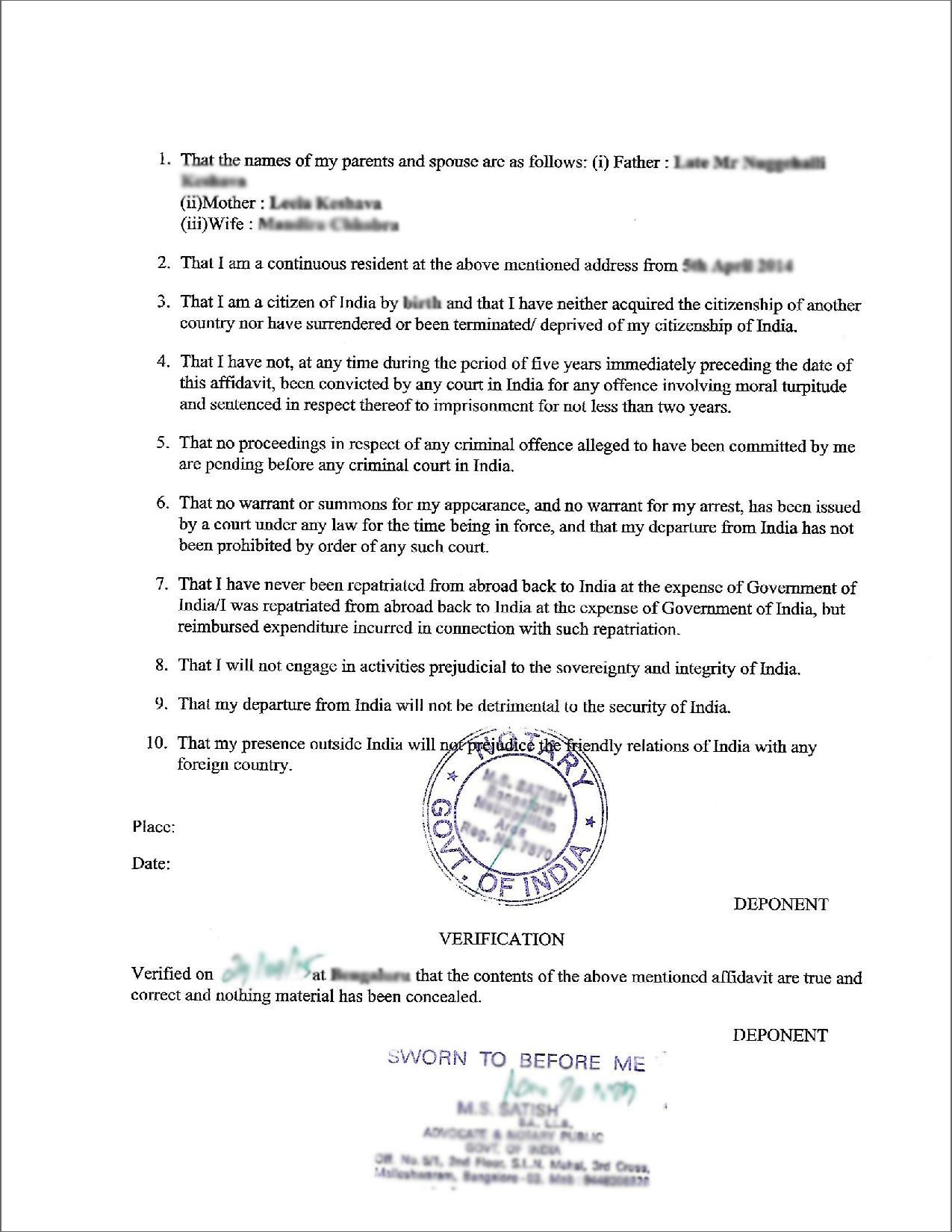 Circumstances For Creating An Affidavit

Affidavits are used whenever there is a reason to swear an oath of any nature, for instance- in passport requirements, divorce proceedings, property disputes, debt cases among others. It is also used in the event of loss of certificates or original documents of any nature, for purposes of changing names of individuals and for a number of different reasons.

According to the Indian Laws, an affidavit can be used to prove a fact in a court of law provided the court orders it. Since affidavits are not included in the definition of ‘Evidence’ in the Indian Evidence Act, they can be used as evidence only when the court finds it reasonable to invoke the provisions of order 19 of the Civil Procedure Code. This provision is however subject to the right of the opposite party to produce the deponent for cross verification.

Following are examples of the commonly used affidavits in India:

What Happens On Filing Of A False Affidavit?

Swearing of a false affidavit can make a person liable to be charged under the Indian Penal Code for the offence of Perjury. It is a grave matter which warrants strict action.

Such provisions ensure that persons who swear untruths in affidavits are aware of the consequences and to prevent them from committing such offences.

How Will LegalDesk Come To Your Assistance?

While it may appear that affidavits are a list of plain facts, it is important to note that it is vital to make it conform to the requisite formats and to include only relevant facts. Thus, it becomes essential that it is drafted professionally. If you wish to create a legally valid affidavit for fulfilling any legal obligation, choose LegalDesk’s pre-drafted legal templates. In case if you do not find the affidavit required by you in our list of online affidavit formats, then click the button below and submit your request, we would love to add more templates to our site.

There are 7 comments on "What Is An Affidavit?".